Kimi’s tattoo is okay for Ferrari

Kimi Räikkönen’s new tattoo on his right wrist was soon put to huge proportions by the F1-media. 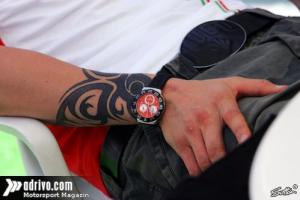 They believed that Ferrari’s team principal Jean Todt was strictly against the tattoo his driver took. Yet Todt was immediately on Räikkönen’s side. Kimi didn’t need any permission for the tattoo. “I read about it. We had dinner on Thursday and since it wasn’t mentioned I didn’t even notice the whole thing. What is the most important for me is that the people here in this team are happy. If Kimi would be happy with a tattoo on his face and would ask for my opinion I would advise him to put it in some place that is less visible because otherwise he might get some problems of it later. There is so much talk – with a smile and without a smile – but what is important is that everyone is concentrated on doing his job. With or without a tattoo. I don’t care. If a sponsor would complain about the tattoo I would rather change the sponsor just to keep Kimi happy”, Todt assured. “He has been planning on taking it for a couple of years already. I think it’s great”, Jenni said. Räikkönen’s tattoo is completely designed by himself. It’s not taken from any book.

Here is a Video of Kimi talking about his new Tattoo. He was asked what kind of Tattoo it is, if it is permanently. His answer was: “I don´t know!”

Kimi leaves the anger on the track – Jenni Dahlman has been following from close Kimi’s painful seasons in McLaren. 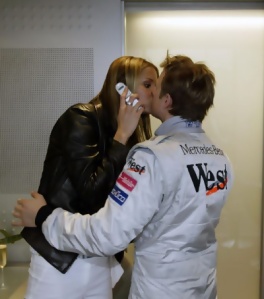 “Of course the DNFs bug Kimi terribly. He has never been angry at me even though his nerves have sometimes been on trial and the reporters have had to leave without any comments,” Jenni assures. “The worst of all was France GP when he was so close to winning. Kimi was swearing for a week about it and it was still burdening him in the next race in Germany. I have tried to support Kimi telling him not to care about the DNFs and it helps because they aren’t his own fault. It goes without saying that it always bugs Kimi when something breaks down but the nickname Iceman is right. Others would have lost their nerves completely,” Jenni said.

During his first season in McLaren in 2002 Kimi had to retire in 11 races. Half of the retirements were due to a DNF. Last season Kimi only had to retire in 3 races. When he now has already two retirements it’s easy to guess that he has no business to last season’s level. Jenni shares Kimi’s disappointments and she has also found new features in Kimi. “Kimi doesn’t anymore express his disappointment and anger when he has a DNF by throwing things around. Two years ago he got really fed up when the race didn’t go as it should have. After last season’s good results he knows what he is capable of and that’s why he can take bad luck better,” Jenni described.

“It would be fun to sometimes listen what Kimi’s first words inside of his helmet are when something happens. I bet a few swear words are flying,” Jenni says. “When something has gone wrong Kimi always goes straight to his own place in McLaren’s garage. If he is really fed up he might kick a door on his way. He never throws a tantrum at me, only to bad luck,” Jenni told Turun Sanomat. “When we leave for home he might say in the car, helicopter or airplane with one sentence that ‘it didn’t go well once again’. And that’s that.” Jenni admits that Kimi is especially irritated when he has to explain over and over again the same thing to different people.

Six reasons why we love Kimi

1. Well-dressed Kimi
In a bid for anonymity, Kimi likes to conduct his business in a gorilla suit. He chose to wear the costume for a speed boat race, entering under his nom de guerre, James Hunt. Raikkonen and two friends competed in the Hanko Poker run, a society event where crews speed around the Finnish port, collecting poker cards that they play with. However when the ape tried to moor the boat, the skipper yelled “Kimi, don’t tie it like that,” and proceeded to give him a lesson in knots. Cover blown. 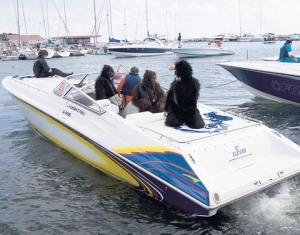 2. Inappropriate Kimi
It was meant to be the glorious swansong of the man Kimi would succeed at Ferrari. Michael Schumacher’s last race, at Interlagos in 2006, saw the German presented with a trophy by Pele. All the drivers turned up to watch – apart from Kimi. Moments later, ITV’s Martin Brundle found the Finn hanging out beside his car. Why had he missed Schumi’s farewell? “I was having a shit,” he disclosed. Well, he was number two on the grid.

3. Gambling Kimi
The Finn’s performance at the 2005 European Grand Prix left all his rivals in the shade. But one small mistake flat-spotted the right-front tyre, and it would cost him dear. With Fernando Alonso close behind, Kimi and his team faced a tough decision: pit and settle for six points, or stay out and go for broke. Sadly, that’s exactly what the McLaren suspension did on the very last lap when the tyre failed spectacularly. Kimi very nearly hit Jenson Button’s BAR as he spun down the straight in a shower of carbon and rubber. No points, but no regrets either.

4. Knife-throwing Kimi
German TV executives realized that, if they were to get Kimi on their programme, they might need to rethink the standard sit-down chat show format. Instead, they set up a circus big top-tent and gave Kimi a motocross bike to ride infront of the audience. But the piece de resistance was when he attempted to throw a set of stake knives at a member of the audience – almost. He may have been a great shot in the Finnish army, but his knife skills are a bit rusty.

5. Kamikaze Kimi
Suzuka 2005 saw Raikkonen’s most impressive performance to date. He started 17th on the grid and fought his way through the field. Giancarlo Fisichella thought he had 10 points when he started the final lap. But Kimi had been planning a dramatic finale. As they raced down the straight to the first turn, Kimi got a good tow, went as far to the outside and he could, rode the rev limiter, flickered right and shot right cross the front of the Renault, snatching the lead with less than a minute and a half to spare.

6. Party Kimi
Raikkonen first gained tabloid notoriety when he showed a London lap dancer the real reason he wears a six point harness. He lost his driving license in Budapest in 2006, but this had nothing to do with a road traffic incident. Kimi had been a Red Bull boat party and was swinging his bag above his head, showering the VIP room with cash and cards. Fortunately everything, including his passport, was returned the next morning. But Kimi’s finest drunken moment was the yacht party where our hero tried to throw something at the crowd below, but lost his balance, falling off the fly deck and onto his head.

One year ago: R.I.P Matti 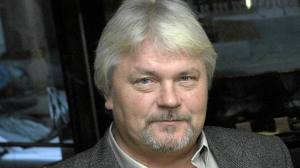 Two days before Christmas Eve in 2010, Matti Räikkönen, Kimi Räikkonen’s father, has passed away at the age of 56. Having been the most important person behind Kimi Räikkönen’s career, the news had a great impact on the former Formula 1 World Champion. Now one year later I hope that the family can enjoy Christmas, I really feel with them. =(

Here is a tribute I made for Matti one year ago: